Further extending its multi-award winning embedded video engine (EVE) product offering, Bridgetek has now introduced the BT815/6 series of highly advanced graphic controller ICs for next generation human machine interface (HMI) development. Support for the Adaptive Scalable Texture Compression (ASTC) algorithm means that image quality can be significantly enhanced without needing greater bandwidth to be allocated as the compression algorithm allows for smaller compressed files. Thanks to this, these new EVE devices have the ability to enable major savings in memory space required when it comes to larger fonts and data-heavy images. Further memory management and system resource improvements are available in the form of a dedicated QSPI host port for attaching an external flash memory, to supplement the EVE controller’s on-chip memory. The dedicated port is used exclusively for accessing external memory thus extending the on-chip capacity to store additional image and audio objects such as bitmaps and fonts required in many feature rich displays. As an additional port this frees up the main system QSPI port used to control the BT815/816 devices from memory copy tasks and as such reduces the workload on the system MCU. 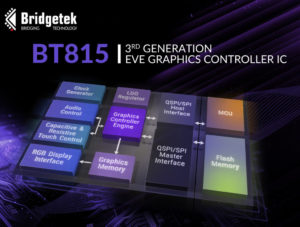 The BT816 offers support for displays with 4-wire resistive touchscreens, while the BT815 is intended for use in conjunction with capacitive touchscreens and can deliver multi-touch operation (with up to 5 touch points accommodated). Both these ICs support the rendering of high resolution (800×600) graphics and have video playback capabilities. The built-in hardware engine can recognise touch tags (providing notification for up to 255 tags) and accurately track touch movement. It also supports customised built-in widgets and functionalities – such as ASTC decode, jpeg decode and calibration.

A programmable interrupt controller allows for the EVE devices to generate interrupts corresponding to events such as detecting touch or completing playback of an audio file ensuring the optimum interaction with the host MCU, without the need to poll the device for responses.

Audio capabilities that can be benefitted from are a built-in sound synthesizer, plus audio wave playback for mono 8-bit linear PCM, 4-bit ADPCM and µ-Law sound encoding (at sampling frequencies between 8kHz to 48kHz). The digital filtering that has been incorporated helps with the reduction of system design complexity when it comes to external filtering.

As with previous EVE generations, the BT815/6 series enables engineers, regardless of their prior experience, to construct compelling, feature-rich and visually-striking HMIs, with graphic control, audio control and touch control interfaces all being incorporated. The innovative object-based architecture employed enables a dramatic reduction in the hardware needed for HMI implementation – eliminating both the frame buffer and large flash memory normally required, and relying instead on just the internal 1MByte graphics RAM. It also means that a less complex, lower cost MCU can be used within the HMI design, further reducing the overall bill of materials.

The new BT815 and BT816 EVE devices are both supplied in 64-pin VQFN-packages. They have an extended operational temperature range covering -40°C to 85°C.