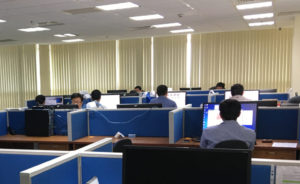 Further expanding its engineering presence across Asia, and also underlining its commitment to continued product innovation, Bridgetek has announced a major investment in Vietnam. Based on the outskirts of Ho Chi Minh City, the company’s new design centre will complement the activities going on at its main development hub in Singapore. The team that has initially been recruited consists of almost equal proportions of engineers involved in software development and engineers carrying out IC verification tasks. The plan is to expand the operation over the course of the next year in order to double the workforce at this site.

With considerable prior industry experience to draw upon, Bridgetek’s Vietnamese software engineering team has a pivotal role to play in the company’s ground-breaking PanL home automation technology. They will cover development of software functionality on the FT900 microcontroller platform, user interface construction, device integration with wireless modules (such as Z-Wave or Wi-Fi) and sensors, plus smartphone app development. Many of the recruited staff have studied in the highly respected universities that are located around Ho Chi Minh City which specialize in engineering and science related disciplines, including its ĐH Bách Khoa, ĐH Tự Nhiên, UIT, ĐH Sư Phạm Kỹ Thuật and HCMIU.

“Ho Chi Minh City has a wealth of software and semiconductor engineering professionals and its universities are continually producing steady flow of new talent,” states Bridgetek CEO and founder Fred Dart. “With our Vietnam design center, we are now able to tap into this resource. The site is certain to make a valuable contribution to the company’s future progression, in terms of both IC product development and the creation of supporting software.”

Enabling smarter homes, Bridgtek’s PanL offering incorporates a broad range of different forms of wireline and wireless connectivity – including Wi-Fi, Bluetooth Low Energy (BLE) 4.2, Zigbee, PoE-enabled Ethernet (100Base-T), etc. Through these it has the ability to interface with multiple home automation systems simultaneously, thereby enabling functions like lighting and heating to be controlled through one simple, intuitive and consistent point of contact, rather than the complexity of numerous proprietary apps. It can thereby greatly improve the user experience.