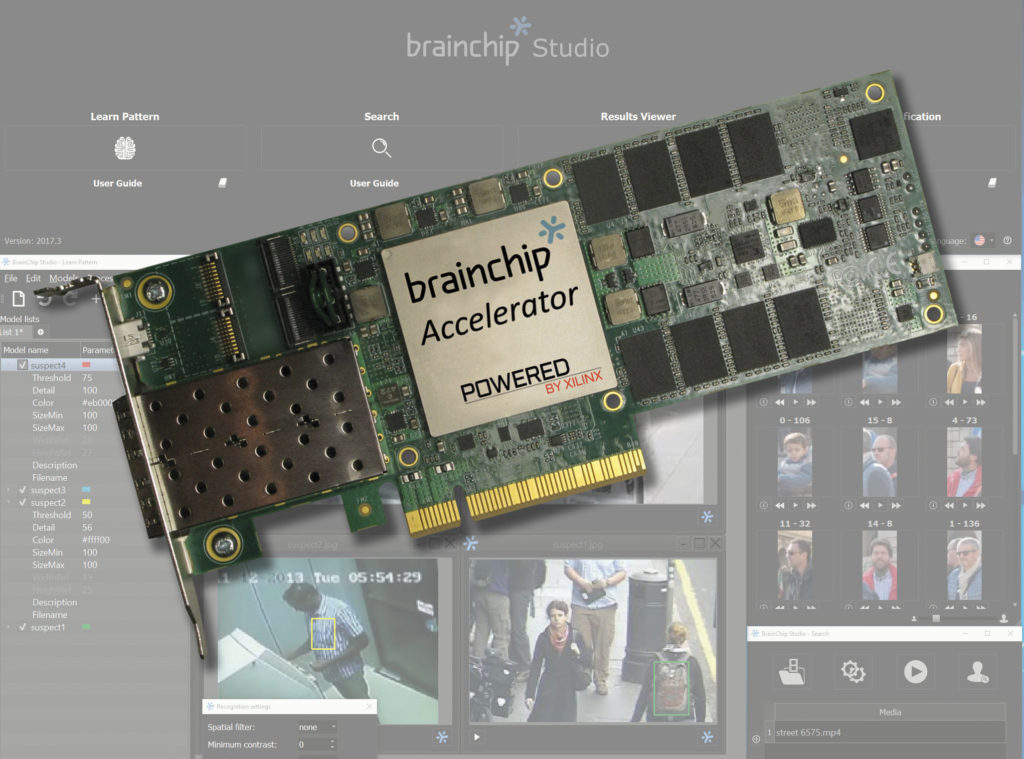 BrainChip Holdings Ltd., a leading developer of software and hardware accelerated solutions for advanced artificial intelligence and machine learning, has announced the release of its hardware acceleration board, BrainChip Accelerator.

BrainChip Accelerator is an 8-lane, PCI-Express add-in card that increases the speed and accuracy of the object recognition function of BrainChip Studio software by up to six times, while increasing the simultaneous video channels of a system to 16 per card. The card is very low-power and can be easily installed within existing video surveillance systems without upgrading power systems or thermal management.

BrainChip Studio helps law enforcement and intelligence organisations rapidly identify objects in large amounts of archived or live streaming video. By processing multiple video streams simultaneously, the BrainChip Accelerator add-in card enables these organisations to search increasing amounts of video faster, with a higher probability of object recognition and lower total cost of ownership. The system learns from a single low-resolution image, which can be as small as 20 x 20 pixels, and excels in recognition in low-light, low-resolution, noisy environments.

As the first commercial implementation of a hardware-accelerated spiking neural network system, BrainChip Accelerator is a significant milestone in the development of neuromorphic computing, a branch of artificial intelligence that simulates neuron functions. The processing is done by six BrainChip Accelerator cores in a Xilinx Kintex Ultrascale field-programmable gate array (FPGA). Each core performs fast, user-defined image scaling, spike generation, and spiking neural network comparison to recognise objects. Scaling images up and down increases the probability of finding objects, and due to the low-power characteristics of spiking neural networks, each core consumes approximately one watt while processing up to 100 frames per second. In comparison to GPU-accelerated deep learning classification neural networks like GoogleNet and AlexNet, this is a 7x improvement of frames/second/watt.

“There is an estimated four exabytes of video data stored in video surveillance systems,” said Robert Beachler, BrainChip’s senior vice president of marketing and business development. “In surveillance, speed and accuracy of analysis are critical concerns for law enforcement and security agencies. The ability of BrainChip Accelerator to process video frames six times faster, while improving the accuracy of object recognition, is a significant force multiplier. It is also a further demonstration of the valuable role that artificial intelligence can now play in these applications.”

Christoph Fritsch, senior director for industrial, scientific and medical business at Xilinx, added: “Xilinx is at the forefront of artificial intelligence acceleration. BrainChip’s spiking neural network technology is unique in its ability to provide outstanding performance while avoiding the math intensive, power hungry, and high-cost downsides of deep learning in convolutional neural networks.”

BrainChip Accelerator is compatible with Windows or Linux computing platforms and is currently available to select law enforcement and intelligence agencies as an integrated server appliance. It may also be purchased as an add-in card for security integrators and OEMs.