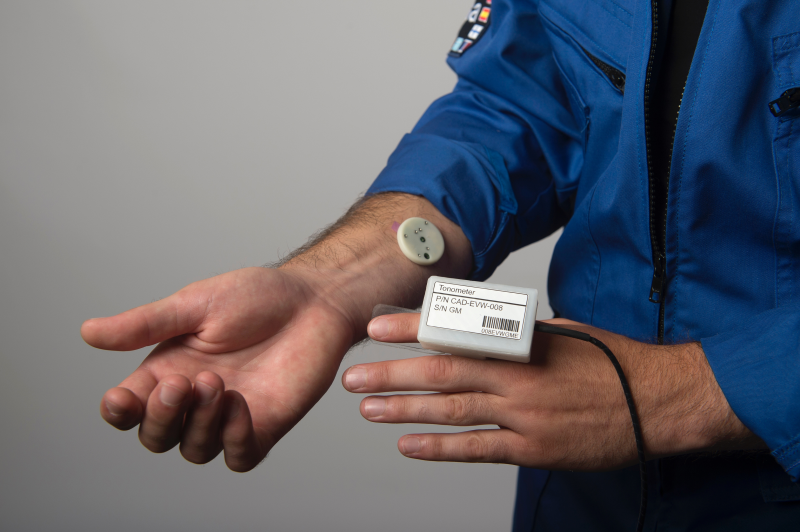 This program, developed by France’s space agency CNES (Centre National d’Etudes Spatiales), its affiliate CADMOS, a ground laboratory focusing on microgravity science, and space medicine specialists MEDES (Institute for Space Medicine and Physiology) includes a personal assistant that astronauts use via a tablet named EveryWear. ESA astronaut Thomas Pesquet will be the first to use it, during his six-month Proxima mission.

EveryWear combines input from three wearable sensors, two of which are provided by BodyCap:

•   The Blood Pulse Wave sensor, a tonometer to record how the astronaut’s arteries react to weightlessness

•   e-TACT, a patch that combines skin temperature and activity recording with the focus on studying sleep patterns in space

e-TACT will be commercially available in Europe and the US from February 2017 with pre-sales starting end of January. The wearable device was designed to combine activity tracking, skin temperature monitoring and body position detection, with data sent wirelessly in real time or stored on the device for subsequent analysis. It can be worn on any part of the body for a long duration and is ideal for a number of general healthcare applications. These include the monitoring of chronic diseases and sleep disorders as well as for monitoring overweight people included in adapted physical activity-based rehabilitation programs.

The Blood Pulse Wave device is a piezoelectric flexible sensor based on BodyCap’s patented Upper Skin technology. It can detect the blood pulse wave and its changes while exposed to long-term microgravity. It has been developed in partnership with the Paris-based engineering school ESIEE.

“Devices used in space for scientific missions have to meet the strict criteria of rigorous quality checks by space agencies. We are delighted that in the new year we can bring e-Tact technology to everyday e-health applications,” said Sébastien Moussay, co-founder of BodyCap and associate professor in the INSERM Lab COMETE U1075. “The successful use of monitoring devices on the ISS proves the reliability and accuracy of our products. We are now actively looking for investors to support us with the international roll-out of the product.”

According to IDTechEx, the global wearable technology market will grow in three stages: nine per cent annually to over $40 billion (€37.7bn) in 2018, then accelerating to 23 per cent – over $100 billion (€94.2bn) – by 2023, before slowing to ten per cent to reach over $150 billion (€141.3bn) by 2026. The market for wearables for activity tracking and e-health applications has a huge potential and is in crucial need of reliable technologies.

BodyCap has extensive experience in the development of connected miniaturised devices. One of its already marketed devices is the e-Celsius Performance connected pill. This has been used for internal temperature monitoring during major world sports events, including the Olympics and the New York Marathon as well as international cycling events, besides being used by the military.