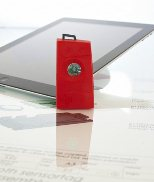 Texas Instruments (TI) has announced the availability of its Bluetooth low energy SensorTag kit. With a downloadable SensorTag App, sample applications, and no required hardware or software expertise, the kit has been developed to remove the barriers to entry for smartphone app developers who want to take advantage of the growing number of Bluetooth low energy-enabled smartphones and tablets. TI has integrated six sensors in the kit to enable a broad range of applications such as health and fitness, educational tools, toys and remote controls, and mobile phone accessories that can be controlled by a consumer’s smartphone, tablet or laptop.

According to TI development is quick and simple. Developers unpack the SensorTag, download the free app to a smartphone, select a sample application, and demo an app in minutes using the SensorTag’s sensors. This gives developers a viable starting point to making a smartphone “appcessory” prototype quickly using the CC2541 Bluetooth low energy system-on-chip (SoC). The CC2541 is supported by TI’s royalty-free BLE-Stack software, technical documents, reference designs and the TI E2E connectivity support community.

An appcessory is a gadget that uses smartphone apps for control and monitoring. See the SensorTag and appcessory examples in action in this SensorTag video.

“For manufacturers, Bluetooth low energy enables a very simple and efficient way of connecting their application to the cloud through a smartphone, tablet or laptop. The SensorTag kit allows manufacturers to quickly and easily evaluate the benefits of adding Bluetooth low energy to their device or build new applications,” said Oyvind Birkenes, general manager, Wireless Connectivity Solutions, TI.

The SensorTag kit is currently aimed at iOS-based applications. The iOS SensorTag App used in the evaluation process can be downloaded for free here. TI plans to provide SensorTag Apps and support for Android and Windows 8 as more Bluetooth low energy-enabled devices roll-out.