Black to the future with new BeagleBone from Rapid Electronics 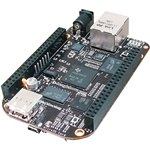 Rapid Electronics is now stocking the BeagleBone Black, the single board ARM-based computer and development platform from BeagleBone. The Black is seen as representing a significant step forward in single board computing hardware, and an alternative to the Raspberry Pi for users looking for a tool more suited to development.

Featuring the Sitara AM3359 ARM Cortex-A8 32-Bit RISC microprocessor (up to 1 GHz), this computer offers a pre-installed operating system and faster hardware. The board features a full range of inputs and output connections including 2 USB 2.0 ports, micro SD card and HDMI port, Ethernet and on-board HDMI to connect directly to televisions and monitors. Two 46-pin headers are compatible with cape expansion cards which have the potential to add components such as sensors, FPGAs, serial ports and LCD displays.

Despite the additional hardware the BeagleBone Black is more power efficient and exhibits faster response times than its predecessor. The more powerful CPU means it offers greater options for robotics developers, and manufacturer Texas Instruments has claimed the BeagleBone Black has the ability to drive 3D printers.

The original BeagleBone’s cape plug-in boards are also compatible with this next generation version, enabling easy integration with previous projects, while the web interface has been upgraded for Arduino-type controls. The Bonescript scripting environment (including coding tutorials) is available online directly to the board via USB, enabling users to program the microcontroller.

Richard Philpot, product manager at Rapid Electronics, said: “It is very exciting to be able to introduce BeagleBone Black to Rapid so soon after its global launch. Designers, developers and prototypers can now choose from an extensive range of single board computing hardware at Rapid, such as Arduino boards, shields and accessories, Raspberry Pi kits and enclosures, so I am delighted to add the BeagleBone Black to our open source selection.”