Avnet Silica, an Avnet company, has announced the availability of a new EtherCAT starter kit for the development of a wide range of fast industrial Ethernet technology-based applications. Implementing the standard Ethernet data-packet format, which provides connectivity to existing Ethernet networks without special routers or switches, EtherCAT delivers highly-efficient, real-time performance enabling data insertion and/or extraction ‘on the fly’.

Based on Microchip’s LAN9252 EtherCAT slave controller chip, the easy-to-use node-development starter kit offers Pmod- and Arduino-compatible interfaces including SPI/QSPI, in addition to a header with all I/Os of the LAN9252, which enables direct connection to a wide selection of microcontroller or microprocessor starter kits for fast prototyping. 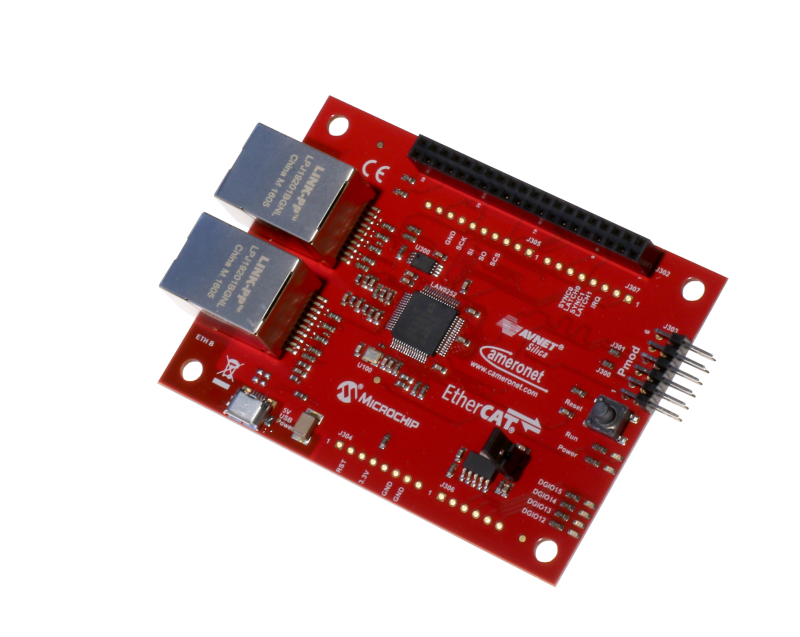 Target applications for the kit include motor-based motion control, robotics, communication modules and I/O interface cards in factory and process automation, rotary encoders and sensors, or control of devices such as actuators, valves and drives in hydraulic and pneumatic valve systems, among many other applications. In addition, the new EtherCAT starter kit can be integrated into the Avnet Silica Visible Things platform for the development of Internet of Things (IoT) projects and applications.

Central to the new EtherCAT kit is the LAN9252 from Microchip, which is a 2/3-port EtherCAT slave controller with dual integrated Ethernet PHYs, each including a full-duplex 100Base-TX transceiver to support 100Mbps operation. The chip also supports auto-MDIX, allowing the use of direct-connect or crossover LAN cables, as well as offering support for a 100Base-FX external fibre transceiver. Other features of the LAN9252 include 4K-bytes dual-port memory (DPRAM), four SyncManagers, three Fieldbus MMUs, a 64-bit distributed clock and extended temperature range from -40°C up to 105°C.

The LAN9252 slave controller offers three operational mode options including microcontroller, digital I/O and expansion modes. In microcontroller mode, the LAN9252 communicates with the host MCU via a flexible 8/16-bit host bus interface or SPI or quad-SPI interface; in digital I/O mode, the LAN9252 controls 16 digital I/O signals without the need of a host MCU; and in expansion mode, use of the LAN9252’s third external PHY Ethernet interface can enable a star- or tree-network topology, or even build a four-port solution with an additional LAN9252, enabling a very high level of implementation flexibility.

The starter kit also offers two RJ45 Ethernet interfaces, as well as operation from a single 3.3V supply; power supply options are via USB or the PMOD and Arduino interfaces. Finally, the starter kit works with the Beckhoff EtherCAT protocol stack, which is free for members of the ETG (EtherCAT Technology Group) as well as many other EtherCAT stacks. Avnet Silica is also currently developing sample software solutions for customers for use with PIC32 and ARM-Cortex based host microcontrollers.

“Microchip and Avnet Silica have a long-standing relationship, and we are both dedicated to working closely with our customers to understand and meet their industrial networking needs. EtherCAT is an established, proven standard which is preferred by most motor control, grid autorotation and data acquisition companies,” said Ian Saturley, worldwide marketing manager for USB and Networking at Microchip. He added, “Many topologies in place are now also calling for Industry 4.0 and the Internet of Things (IoT) which are embraced within EtherCAT. In generating the PMOD-COM-ETHERCAT system, Avnet Silica has responded to customers’ requests with a fast time to market and low cost of entry evaluation platform.”

The EtherCAT starter kit is available from Avnet Silica immediately.