UK and Ireland Manufacturer Authorised Distributors of electronic components have reported a generally positive sales performance in the first month of the year. According to the figures released by the afdec leadership group within the Electronic Components Supply network (ecsn) the consolidated total Monthly Billings (Net Sales Invoiced less Credits) in January ‘18 increased by 21 per cent when compared to the previous month and increased by 14.5 per cent when compared to January ‘17.  According to ecsn chairman Adam Fletcher, January ‘18 saw a reversal of the disappointing semiconductor sales that UK and Ireland Authorised Distributors experienced in December ’17: “Compared to the same period 2017, semiconductors sales increased by 16 per cent in January, and sales of ‘Passives’ also showed a 16 per cent increase,” Fletcher said. “’Electro-mechs’ increased by 31 per cent while ‘Component Assemblies’ increased by 11 per cent. However, our catch-all ‘Other Products’ reporting group showed a small (five per cent) decline compared to the same month 2017.” 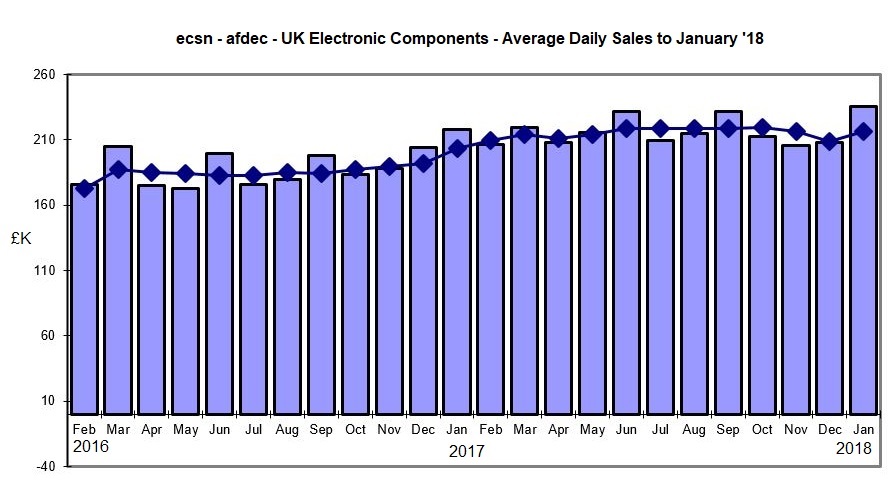 The Book-to-Bill ratio declined ‘by 13 points to 0.98:1 in January ‘18, but afdec/ecsn members welcomed an increase in overall Bookings (Net Sales Entered) of eight per cent compared to December ‘17, together with a six per cent increase over January 2017: “The polynomial trend line suggests a positive B2B ratio as we progress further into 1H ’18,” continued Fletcher. “The sales by month ‘three month moving average’ for all electronic components suggests that continued growth into 1H ‘18 is likely, which is broadly in-line with longer term historical trends.”

The IHS Markit/CIPS UK Manufacturing Purchasing Managers’ Index (PMI) in January reported a decline of one point on the previous month against a backdrop of rising price pressures. The organisation believes that growth in new orders is continuing but the rate of growth is now slowing and is at a seven-month low. According to IHS Markit/CIPS, organisations are increasing their forward order cover to gain volume discounts and increasing their selling prices to customers, but demand needs to increase over the quarter to drive ongoing growth.

ecsn/afdec members broadly agree that UK customers remain positive about their business prospects into 2018 and are continuing to add order cover to meet customer demand: “I suspect most customers have now slightly increased their in-house inventory to reflect the extended manufacturer lead-times and are placing longer term schedules on their distributors, in-line with forecast demand,” concludes Fletcher. “Our members anticipate continued sales revenue growth in 1H’18 and are diligently managing their inventory in-line with demand from their customers.”