As Samsung upgrades US chip factory, Foxconn looks to tackle violations at its plants in China 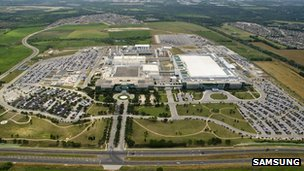 Samsung has announced that it is to spend $4bn (£2.5bn) upgrading its US factory in Austen, Texas, which makes processors for smartphones and tablets. It is the company’s only semiconductor plant outside its home country, South Korea, and it makes chips for Apple’s iPhones as well as for Samsung devices.

According to the company the investment will allow it to make the latest system-on-chip designs and help minimise manufacturing costs. These will include a CPU (central processing unit), GPU (graphics processing unit), memory and other elements.

The factory will be able to make wafers using a 28nm process and the company said that it was aiming to mass produce the technology by the second half of 2013.

Samsung says the move will take its total investment in the factory to $13bn since 1996, making it the biggest ever foreign investment into Texas.

The investment was seen as sensible by analysts. Silicon and the various precious metals that are involved in manufacturing these chips are located in the US in Nevada, Texas and Arizona. As a result Samsung will be able to offset the costs associated with higher labour and transports costs in the US.

Austin is home to a tech hub nicknamed Silicon Hills – one of the US”s biggest research and development centres outside of Silicon Valley – and another reason for the investment is the availability of a skilled workforce.

And by spreading its manufacturing base to several geographies Samsung is now better protected against natural disasters, currency fluctuations and other events that could leave it exposed, such as the floods in Thailand and the tsunami in Japan.

While Samsung announced a significant investment in the US its bitter rival Apple said that Foxconn, the company’s top manufacturer, had improved safety conditions and cut working hours in an effort to resolve violations at its plants that triggered a global scandal last year.

The Fair Labor Association (FLA) was asked by Tim Cook, Apple’s CEO, to investigate the company after reports of suicides and abusive conditions at factories in China. The FLA found at least 50 violations of local regulations at Foxconn plants in Chengdu, Guanlan and Longhua.

The FLA said Foxconn had made significant improvements such as introducing more breaks and better maintenance of safety equipment. Wages have been more than doubled after protests from worker groups and laws are to be changed to extend unemployment insurance.

According to the FLA Foxconn faces more challenges in the coming months that will involve major changes in the working environment.