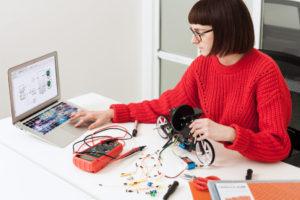 Arduino has announced its partnership with MathWorks, a leading developer of mathematical computing software for engineers and scientists, to reinforce the importance of Arduino at the university level in the fields of engineering, Internet of Things, and robotics. The Arduino Engineering Kit is the first product released as a result of the partnership and will be available for purchase starting today on the Arduino online store. The Arduino Engineering Kit consists of three cutting-edge, Arduino-based projects that teach students how to build modern electronic devices – challenging them intellectually and helping them develop physical engineering skills that will better prepare them to enter the commercial market following graduation.

“Our goal is to have a significant impact on the next generation of engineers. To do that, we have been working hard to develop educational products that can inspire students around the world with a strong emphasis on a project-based educational approach,” said Fabio Violante, Arduino CEO. “We’re excited to be working with MathWorks to facilitate this process in universities around the world, aligning education with industry.”

Following the global success of the Arduino CTC 101 program, the program for upper secondary schools, the Arduino Engineering Kitenables college students and educators to incorporate core engineering concepts into their Arduino projects, thanks to industry-standard tools for algorithm development, system modeling, and simulation.

“We designed the Arduino Engineering Kit the way we would have liked to have learned mechatronics, control algorithms, state machines, and complex sensing when we were in our first years of engineering school: in a fun and challenging way,” said David Cuartielles, Arduino co-founder and Arduino Education CTO. “It’s all about hands-on activities built on top of well-grounded theoretical concepts. But more importantly, after finishing the basic materials, there’s plenty of flexibility to experiment, for the students to deviate and test their engineering creativity.” 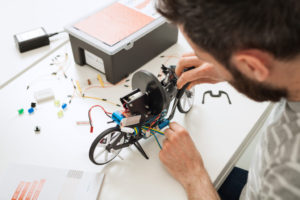 Inside the new kit is an easy-to-use Arduino MKR1000 board, several customised parts, and a complete set of electrical and mechanical components needed to assemble all three projects:

In addition to the hardware included, after registering online, the student will have access to a dedicated e-learning platform and other learning materials. Additionally, they are granted a one-year individual license for MATLAB and Simulink, which provides them with hands-on experience in system modeling and embedded algorithm development.

“Today’s engineers are being asked to build increasingly smart, autonomous and connected systems,” said Roy Lurie, vice president of engineering, MATLAB products at MathWorks. “The Arduino Engineering Kit with MATLAB and Simulink gives students a unique, hands-on experience with the tools that are used to build these systems by engineers around the world.”