Anritsu Corporation is pleased to announce the launch of the newest Signalling Tester MD8475B for verifying the performance of User Equipment (UE) using cellular communication standards, including the latest LTE-Advanced specifications from 3GPP. 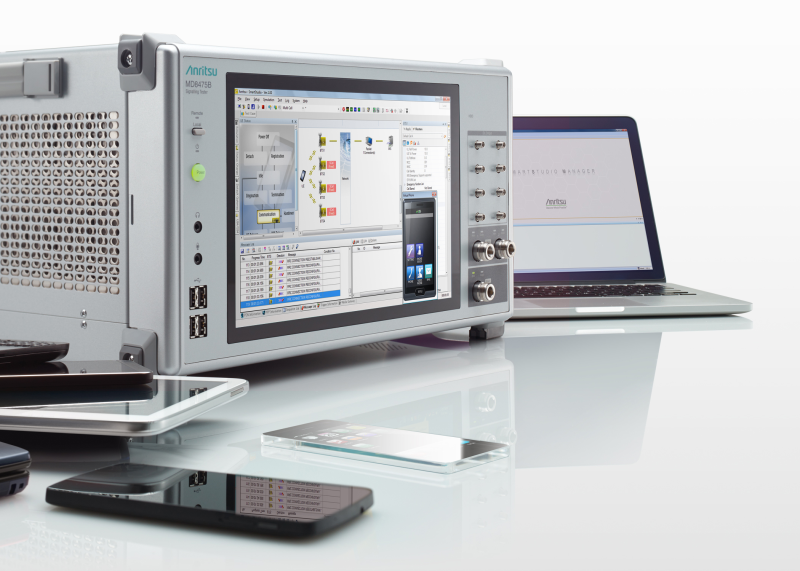 The widespread use of high-function mobile terminals such as smartphones is driving an explosive increase in data traffic volumes. The latest LTE-Advanced technology, offering faster download speed than its LTE predecessor, is being deployed increasingly worldwide to cope with higher data traffic volumes. The key technologies in achieving these faster speeds are carrier aggregation (CA), which aggregates several component carriers together, and MIMO, which uses multiple input and output antennas. They result in a complex test environment due to the increased number of RF ports. In addition, the need for Inter-RAT tests with existing legacy systems requires a tester with stable support of both the legacy and the latest standards all in one platform.

To meet these needs Anritsu has developed the all-in-one MD8475B tester offering a 4CC CA test environment to development testing of LTE-Advanced terminals. With its simple and easy-to-use SmartStudio GUI, it is the perfect solution for LTE-Advanced and 2G/3G Inter-RAT test performance evaluations.

The newly developed all-in-one MD8475B tester is designed for development test of smartphones and running performance tests and IP layer throughput tests of the latest devices equipped with four component carrier aggregation (4CA) and 2×2 MIMO technologies. The MD8475B removes the needs for users to develop own test scenarios by using SmartStudio state-machine software featuring an easy-to-use GUI and the stable automatic measurement environment.

The MD8475B is fully backward compatibility with the current Signalling Tester MD8475A and scenario-less Smart Studio GUI. This is achieved by using a common control and signaling environment for both models, whilst the new B model introduces a greater number of RF ports (for 4CA and MIMO) and capability to operate the RF carriers up to 6 GHz, as well as a higher throughput measurement capability.