Anatomy of a 5G smart city

As smart city technologies begin to emerge in volume, their network requirements will have to cope with 5G workloads, and will need to do that in a 5G way. In this article, Riot takes an in-depth look at an award winning smart city approach which is built around the municipality’s own fibre, Software Defined Networks and cloud analytics software – a system which will survive the transition into a 5G world, as it searches for a formula to monetise next-gen citizen services. This report is entitled: “Anatomy of a 5G Smart City”.

Each week, around a million people migrate to cities, in a trend that will continue for the next 30 years – meaning that by 2050, two-thirds of the expected global population of nine billion will live in cities. Many cities are already embracing smart city tech, with the likes of Singapore, London, Barcelona, San Francisco, and Tokyo usually populating the ‘top smart cities’ polls. This month, in a special report, Riot looks at the leading smart city in the UK—having overtaking London in many key measures. 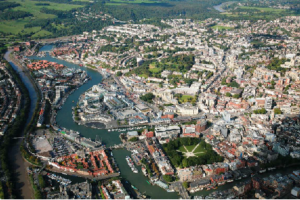 The city in focus is Bristol, which has a goal to create an operating system and applications to run a city, allowing it to manage data and services in a technology agnostic way. It has sucked in the local municipality, multiple universities, key trading partners, including tier 1 providers looking to crack the smart city markets, as they open up around the world. It has built its ethos around wide-scale experimentation and vendor access to the data this throws up.

The city has tinkered with apps that give access to free WiFi, and with proof of concepts for LTE and 5G. It has built a Wi-SUN RF mesh network to manage lighting, and has a comprehensive city operations centre, and as we said its own fibre network.

Riot would argue that this is just the starting point for any truly smart city and that 5G communications, small cells, millimetre wave and MIMO will just make all of this more possible, and make it more desirable to access and make the best of all that data.

Bristol’s results and experiments are now stretching to take in nearby cities as it lines them up as partners and extensions of its services, and opens up the Pandora’s box of city life in other towns.

To read this exciting 20 page profile of one of the world’s most advanced smart cities, you just have to be a subscriber to Riot, Rethink’s IoT and Enterprise disruption research service. An individual subscription costs $650.

Who should read this report?

Any IoT worker, planner or vendor, any cloud software provider, mobile network operator, major enterprise, or software house should be reading this report and all the other outputs of Riot, at the C Suite level down to product marketing.

Why has Rethink written this report?

Riot consists of two issues a week; and one research paper each month

First, a curated view of the week’s news, with links to every major point of interest in the IoT.

Second, a set of essays on current issues in the development of IoT, AI, and Cloud processing consisting – 25 pages of analysis and thought leadership.

And finally a monthly review of a key issue. Recent monthly reports include:

Each of these monthly Research papers are priced separately at $650, and yet they are FREE with a subscription to Riot (which also costs $650) – so it makes sense to buy into the entire service.