ams enables homeless to change their lives through football

ams, a supplier of high-performance sensor solutions, is extending its support of Caritas Austria to sponsor both the Austrian national squads that will participate in the 17th Homeless World Cup in 2019. In addition to financial support, the company will host the squad members to its headquarters near Graz – home of the first Homeless World Cup – for a program of personal development and work-related activities designed to help improve their life and work opportunities after the tournament. 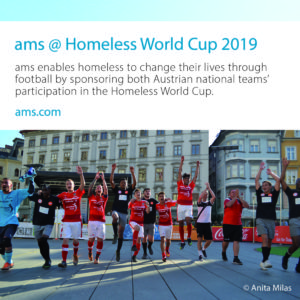 This year’s Homeless World Cup will welcome 64 men’s, mixed or women’s teams fielding four players per game to the ‘street football/soccer’ tournament in the Welsh Capital, Cardiff. Enjoying the Ambassadorship of Welsh Hollywood star, Michael Sheen, the 2019 Tournament intends to create a long-lasting legacy by maximizing exposure for the event, and in doing so change people’s perceptions and understanding of homelessness, while extending employment- and life opportunities for the participants.

“An estimated 100 million people are homeless worldwide – over 15,000 in Austria alone. So, winning the tournament is not the only aim – the ‘winning goal’ is to empower people to succeed at life!” says Michael Wachsler-Markowitsch, chief financial officer, ams. “That’s why ams has pledged to do what we can to support homeless people in our local community via our sponsorship of the Caritas Austria Homeless World Cup project, and the 22 team members (including 16 players) on the men’s and women’s Austrian national squads. We’ll again create opportunities for ams employees to support this great cause, especially in Europe and the United States where national teams are participating – to donate, or to share support on social media or on the sidelines.”

The men’s team will again be managed and trained by Gilbert Prilasnig, a former Austria national football team player who in 2017 received a ‘Human Rights Award’ from the Mayor of Graz, together with Harald Schmied, for his engagement with the homeless. The brand-new women’s team will be managed and trained by Emily Cancienne, a professional footballer originally from the USA who has lived in Austria since 2015 and last year was nominated by the Austrian Sporthilfe organization in the social award category.

The Homeless World Cup was co-founded by Mel Young and Harald Schmied, who came up with the idea following a conference about homelessness in 2001. They wanted to change the lives of homeless people all over the world, and they believed soccer could help them do it. The first Homless World Cup tournament took place in Graz in 2003, and the event and network has been growing steadily ever since, occupying a pioneering role in the field of sport & development.

What happens to players after the annual Homeless World Cup tournament?

National partners, such as Caritas Austria, integrate football with other approaches locally. When they return, a large percentage of players improve their lives through education, employment in social enterprises and other businesses, substance abuse rehabilitation, and supported housing. An amazing 94 per cent of players consistently say that the Homeless World Cup has had a positive impact on their lives. The feeling of belonging, challenge of working in a team, regaining a health-oriented attitude towards life, self-esteem, experience of representing their country, and last the experience of fun is a powerful combination to change a person’s life.

‘Sensing is Life’ – a human connection

For ams, ‘Sensing is Life’ and our passion is in creating sensor solutions that make devices and technology smarter, safer, more environmentally friendly and easier to use. We are shaping the world with sensor solutions, leading the way in forging continuous connections between people and technology, and envisioning a seamless experience between the two. Among ams’ core values are a passion to win, engendering trust & integrity, and imagining the impossible – all values which we share with the Homeless World Cup cause.