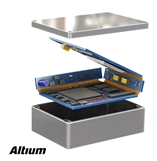 This update – which is available to all subscription users – will bring Altium users improved Component Variant Support, which will give them the ability to design the schematic and PCB for drop-in replacement and alternative parts. This provides sizeable productivity gains for product variants, while also making it easy to source and manage multiple alternative parts from the supply chain.

“We are committed to engaging with our user community and responding to their needs to continually improve our software,” said Altium Limited CEO, Aram Mirkazemi. “Since the initial release of Altium Designer 14, we have released two additional updates that have incorporated the features and improvements that our customers are looking for.”

To better support 3D rigid-flex designs, the new version features 3D STEP Export of rigid-flex PCBs in the folded state. Previously, MCAD designers had to model rigid-flex boards as sheet metal parts, which limited the accuracy of the design. With this update, designers can open the folded model of a flexible PCB in mechanical design tools to ensure form and fit are correct. In addition, they can run detailed analysis on the PCB, checking on connections and heat flow.

Along with improved support for Variants and 3D STEP Export, Altium Designer 14.3 delivers improvements to schematic wire dragging, with development focused on maintaining connectivity while improving productivity. This includes improvements to the handling of overlapping wires, net labels and junctions.