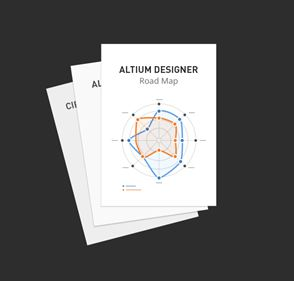 Altium has announced the public release of never-before-seen roadmaps for their entire product lineup. These roadmaps provide a rare glimpse into years of development plans for the company’s PCB focused design and management tools, including Altium Designer, Altium Vault, PCBWorks, CircuitStudio, and CircuitMaker. You can view the roadmaps now at http://future.altium.com/.

“Transparency is a top priority for us, and we’re more excited than ever to share our plans for the future of PCB design,” said Peter Ricci, head of PCB at Altium. “We want everyone to know exactly where the future of their tools reside. It’s our goal to instill a sense of confidence and security so our customers know that their PCB design tools have a future with Altium.”

This move by Altium to reveal their development plans for their complete product lineup comes at a time of stability in the the company’s development, release, and technology processes. With rising stock prices, and a solid financial trajectory, the company felt it was necessary to provide a greater sense of transparency for current and prospective customers to fully understand the future goals of their design tools.

The roadmaps contain specific development plans for the years ahead, and define planned feature additions and visions for all of the company’s products. This release comes as a welcome insight for current and prospective customers about the intent of the company’s PCB design tool offerings following the succession of new product releases in late 2014 and early 2015. The specific product development plans unveiled in these roadmaps includes:

– PCBWorks – provides a PCB design platform for mechanically-focused design teams that use SolidWorks.