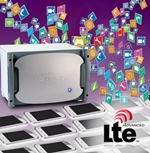 According to the company the  TM500 Test Mobile os able to deliver more LTE-A development capability with a higher UE density than other solutions currently on the market.

The TM500 Test Mobile platform is the de facto industry standard for testing LTE and LTE-A base stations, and is used by all leading network infrastructure vendors. Aeroflex continues to work with mobile operators and infrastructure vendors to introduce the latest 3GPP features at the earliest opportunity, thus enabling them to develop and roll out the high bandwidth services promised by LTE-A in both FDD and TDD modes for operation.