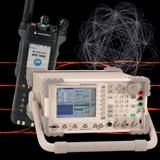 “This is our most extensive software upgrade yet for the 3920. It was driven by two factors-fulfilling customer requests for specific new features and adding support of the new P25 Phase II TDMA technology based on the TIA/EIA-102 standard,” said Rob Barden, director of product marketing, Aeroflex. “In addition, we have released a wide range of enhancements to our 8920 emulation mode, helping customers more easily replace obsolete Agilent test sets and smoothing the transition to a modern PMR test system that supports both legacy analogue systems and the new digital systems being developed around the world. The 3920 is virtually future-proof. It”s really the only radio test set a customer will need for almost all PMR testing requirements,” he said.

New IF and audio filters have also been added to further emulate the Agilent 8920 test set, allowing users of this older test platform to easily upgrade to the Aeroflex 3920 and support for DMR systems such as MOTOTRBO has been enhanced with new analogue test features. DMR radios utilize both digital and FM operational modes, and with this new release, the 3920 now eliminates the need to switch between the 3920″s analog and DMR digital test modes. This feature saves time when testing and aligning DMR radios.