Stefan Grötsch, senior key expert applications for LED/automotive at Osram Opto Semiconductors, talks about the developments in LED technology and road safety within the automotive industry

Lighting is playing a far greater role for automotive design now than it did just a few years ago; headlights have looked very similar for a long time. Aside from new design options, which allow different automotive brands to differentiate themselves from each other more effectively, the technical advances in LED development also facilitate new lighting concepts for improved safety and greater comfort. Innovative types of LED form one of the bases for new options in lighting design. 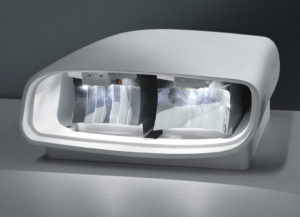 Historically, headlight design was predetermined by factors such as the size required to accommodate the light-emitting devices, such as halogen lamps. The halogen’s key advantage is low cost, and the fact that it is easily replaceable makes up for the disadvantage of a limited service life. It does, however, have relatively high energy consumption and low efficiency at an average of 26 lumens per watt; and because of the light being radiated in all directions, halogen filament lamps can offer poorer illumination performance overall compared to the alternatives. At less than 3,000 kelvin, the colour is always in the spectrum of warm light, while cold light options are deemed to be advantageous for night vision.

HID lamps (High Intensity Discharge) on the other hand, offer significantly better efficiency at typically 90 lumens per watt. However, when the covers of HID headlamps are obscured by dirt, this produces glare through scattering. Consequently, a cleaning system such as headlamp wipers is mandatory above certain brightness, adding to design complexity and cost.

Compared to these conventional light sources, LEDs offer many advantages, and the options are proliferating at great speed. LEDs already provide a high level of energy efficiency and are extremely robust and resistant to vibrations and many environmental influences, and at some 100 lumens per watt today, the technology enables constructions of extremely compact dimensions. In addition, they are durable enough that there is hardly any noticeable reduction in performance throughout the nominal 10,000 operating hours during a typical vehicle’s life. This is set to become even more relevant for electric vehicles than it is for petrol or diesel cars.

LEDs open entirely new design opportunities, which will enable automotive brands to differentiate themselves from the competition among other things. 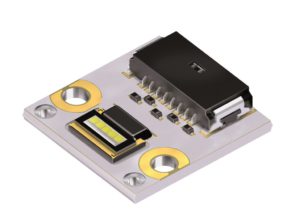 The role of lighting in safety and comfort

Equally as important as design, if not more so, are the advances in the area of road safety and driving comfort. Here too, the use of lighting can make an important contribution. Today, the focus is particularly on intelligent functions such as those of adaptive front lighting systems (AFS) and glare-free adaptive driving beam solutions (ADB). Thanks to the advances in LED development, such as improved thermal management, system cost optimisation, standardisation and simplified assembly methods, the costs for these systems are coming down and they are no longer restricted to the premium segment as had generally been the case for systems based on xenon headlamps. To drive developments forward, Osram Opto Semiconductors is investing strongly in R&D in these areas in our role as an industry pioneer.

Added to this are the known benefits of LED, such as in particular high efficiency, low energy consumption, high vibration resistance and long life. Even after an assumed operating time over a vehicle’s life of 10,000 hours, the loss of light is hardly perceivable, which means that the LED will not need to be replaced.

The next generation of headlights

Currently, eight to 84 pixels per headlamp are most popularly used for intelligent front lighting systems, but development work to create a basic ADB functionality with between three and 12 pixels for widespread use of an anti-glare high beam at entry level is ongoing. According to experts, as few as three segments can provide a significant benefit in increasing safety at night and thereby lowering the risk of accidents.

Intelligent AFS and ADB lighting systems involve turning individual pixels on and off to adjust the light distribution to best match changing road and traffic conditions. Drivers no longer have to turn their high beam on and off, but can keep it on continuously. Modern camera systems recognise the traffic situation and allow individual pixels to be switched on or off automatically so that the road is adequately lit without dazzling the oncoming traffic. Advance development work currently carried out by manufacturers and their research partners aims at boosting the number of pixels by two to three magnitudes.

With an efficient LED solution that is suitable for standard manufacturing processes, the advantages of intelligent AFS and ADB systems can be made available to a wider user group – from compact cars to top-of-the-range vehicles. This progress is achieved with improved luminous efficacy through performance optimisation in chip and package technology, as well as improvements with respect to appearance and efficiency through package design characteristics, such as a rectangular radiation surface and position markers, efficient thermal management, integrated screens and individual controllability with guaranteed contrast for ADB applications, as well as outstanding cost-efficiency through standard SMT processes.

Osram Opto Semiconductors has developed the prototype of a surface-mountable 5-chip LED for exterior vehicle lighting, demonstrating the performance capability of this technology with an output of 2000 lm, which means that it represents an alternative to premium HID solutions.

The future of headlamp technology

Innovations in this space show no signs of slowing. LED developers are already working on the next generation of high-current LED chips to open up new opportunities for LED headlight technology, including a high beam unit that is smaller than a matchbox. Osram Opto Semiconductors has developed such a prototype with a single LED chip, which radiates white light with a 1400 lumen beam. With a wattage of just under 22 W, the LED achieves a luminous intensity of 200 megacandela per square metre. This means that the luminance of this LED is three times as bright as that of LED which have thus far been integrated into headlights. Existing LED offer between 60 and 80 mcd/m².

Development is progressing at a particularly rapid speed where multi-pixel LED chips are concerned. In this area, we collaborate in the “μAFS” (pronounced: micro-AFS) research project with partners including Daimler, Hella, Osram Specialty Lighting, Infineon and the Fraunhofer IZM and IAF Institutes. While the rule had been: “one LED chip = one pixel” until a few years ago, we were already able to present a prototype of a 1024 pixel light source for a headlight with several thousand pixels at ISAL 2015.

Developments such as this illustrate how much potential there still is in LED technology and indicate that it is worthwhile for the whole lighting industry to continue investing in R&D.