New arrival on the embedded systems market Bridgetek has just introduced a series of development modules. These items of hardware are designed to assist engineering professionals as they strive to implement more sophisticated and functionality-rich human machine inter-faces (HMIs) and ensure market differentiation. Based on the second generation of the multi-award winning Embedded Video Engine (EVE) devices, the modules provide engineers with a foundation on which to rapidly prototype, or even directly construct superior HMIs. They each have a 5.0” format 800 x 480 pixel TFT display capable of supporting both portrait and landscape orientations. A built-in audio amplifier is also included on these units so that an external 1W speaker can be attached to them. 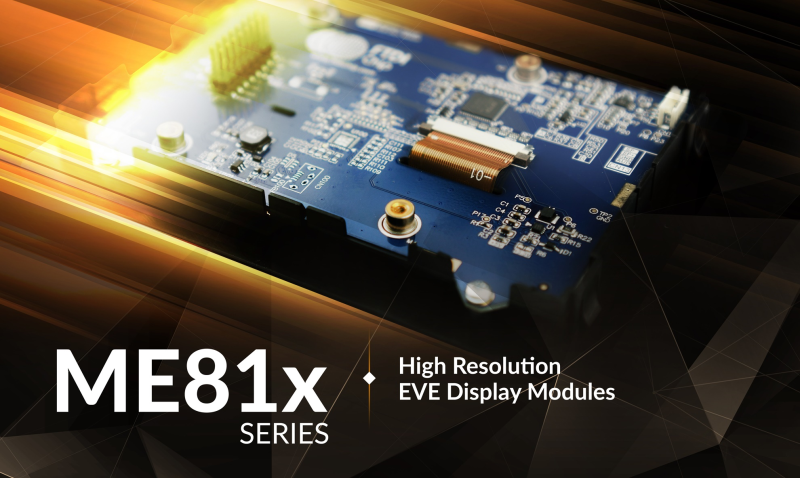 There are a total of four products in this new series. The ME812AU-WH50R and ME813AU-WH50C respectively utilise FT812 and FT813 EVE advanced graphic controller ICs, and correspondingly support resistive and capacitive touch screens. Each of these modules behaves as a USB device, with an FT4222H USB-to-SPI bridge incorporated so that they can be ac-cessed from a PC or any other form of USB host. In contrast the ME812A-WH50R and ME813A-WH50C modules (with resistive and capacitive touch screens respectively) behave as SPI slaves. Consequently they require use of an SPI Master in order to take care of microcontroller interfacing and system integration. Both of the capacitive touch screen based modules offer multi-touch operation (with provision for up to five simultaneous touch points). In the case of the resistive touch screen modules, they allow touch operation through gloved hands (something of great value in industrial applications).

EVE graphics controller ICs combine display, touch and audio functionality within a single chip and take an innovative object-oriented approach to HMI implementation that is proving highly effective. It leads to more streamlined solutions that are simpler to create, with significantly lower component counts, reduced board space requirements, curbed power consumption, etc. The second generation EVE devices at the heart of each of these new development modules have greater pixel resolution than the previous EVE ICs, resulting in sharper image rendering and greater colour depth. They also have accelerated data transfer and image/video loading capabilities, enhanced video playback, plus expanded memory resources. All of the modules are supplied with a bezel that has four mounting holes to facilitate system assembly.