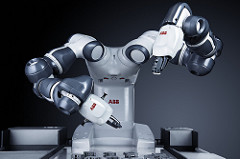 ABB has won the prestigious ‘Invention and Entrepreneurship in Robotics and Automation’ (IERA) award for its YuMi dual-armed collaborative robot. Presented annually by the IEEE Robotics and Automation Society and the International Federation of Robotics, the award recognises ground-breaking inventors and entrepreneurs who develop their ideas into world-class products.
Launched in 2015, YuMi has already had a major impact across industry, including opening up new opportunities in applications previously deemed unsuitable for robotic automation. With no need for barriers, cages or zones, YuMi is able to work safely side-by-side with human workers, enabling organisations to achieve enhanced productivity by combining the speed and dexterity of robots with the skills of their manual workers.
The judges selected ABB’s YuMi after considering robotic solutions from three companies shortlisted for the 2016 award. Announcing the winner at the International Symposium of Robotics, held at the Automatica trade show in Munich, Germany, they said ABB had been chosen “in recognition of a highly focused and outstanding effort in integrating perception, safety and co-existence into a dual-arm robot for small-part assembly.”
YuMi is the result of several years of research and development to develop a lightweight robot that could be safely and easily introduced into manufacturing environments.
Its compact table-mounted design means it can be easily moved between different stages of a production process. With a speed of 1500mm per second and the ability to return to the same point within 0.02mm of accuracy, YuMi makes high quality fast production possible. The use of lead through programming, where the operator ‘teaches’ YuMi by moving its arms into the desired positions, also means that it is extremely simple to set-up and use, eliminating the need for specialist programming skills.
Commenting on the award, Mike Wilson, General Industry Sales and Marketing Manager for ABB Robotics UK and Ireland says: “We are delighted to have won this award, which reflects all of the time, effort and innovation that has gone into developing YuMi. The result has been a truly collaborative robot that not only has the potential to transform perceptions of what robots can do, but also redefines the relationship between robots and manual workers by combining their respective strengths.”
“The many inherent benefits of YuMi, together with its ability to enhance the productivity of manual workforces, open up great opportunities for UK businesses to boost their competitiveness. We’ve already begun to sell YuMi to a number of end users since the end of last year and have seen a growing interest in the product across industrial sectors as its many applications become widely recognised.”
For more information about YuMi, visit www.abb.com/robotics, email robotics@gb.abb.com or call 01908 350300 ref. ‘YuMi’.
www.abb.com
Share