A third of Brits choose LED lights to save energy

LED lights have become a viable option for UK households wanting to make energy and cost savings, reveals a new survey by reichelt elektronik. Lasting significantly longer than conventional lamps, a third of respondents say energy savings are the biggest influencer when it comes to buying an LED light but upfront costs remain a barrier to purchasing. 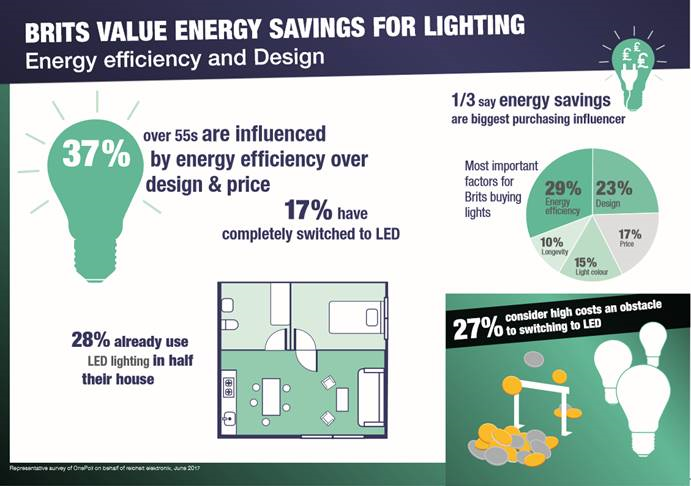 Spotlight on efficiency and design

The survey revealed that the benefit of these energy savings is of greater concern than luminosity (21 per cent) and colour (nine per cent).

The findings also show that energy efficiency is the most important factor for a quarter of Brits when buying any lamp, as consumers seek the long-term cost savings on offer versus conventional bulbs. Efficiency is of particular concern to over 35s, with 37 per cent of over 55s saying it influences their choice of lighting. Design with a wide range of lighting options (23 per cent) is the second most important factor for Brits.

Price only ranked the third most important purchasing factor overall. This shows consumers are becoming more concerned with qualitative aspects such as energy savings and design when choosing lamps. Consumer needs have shifted as they look for ways to become as energy efficient as possible instead of being primarily influenced by upfront pricing.

73 per cent of UK consumers are already reaping the benefits of using LED lamps in their home, with 17 per cent of respondents having already switched to LED lights completely. Over a quarter of Brits (28 per cent) already use LED lighting in more than half of their household and 29 per cent have converted a few lamps (less than half) to LEDs. However, costs are still cited as the biggest barrier to switching to LED lighting with 27 per cent finding it expensive to do so.