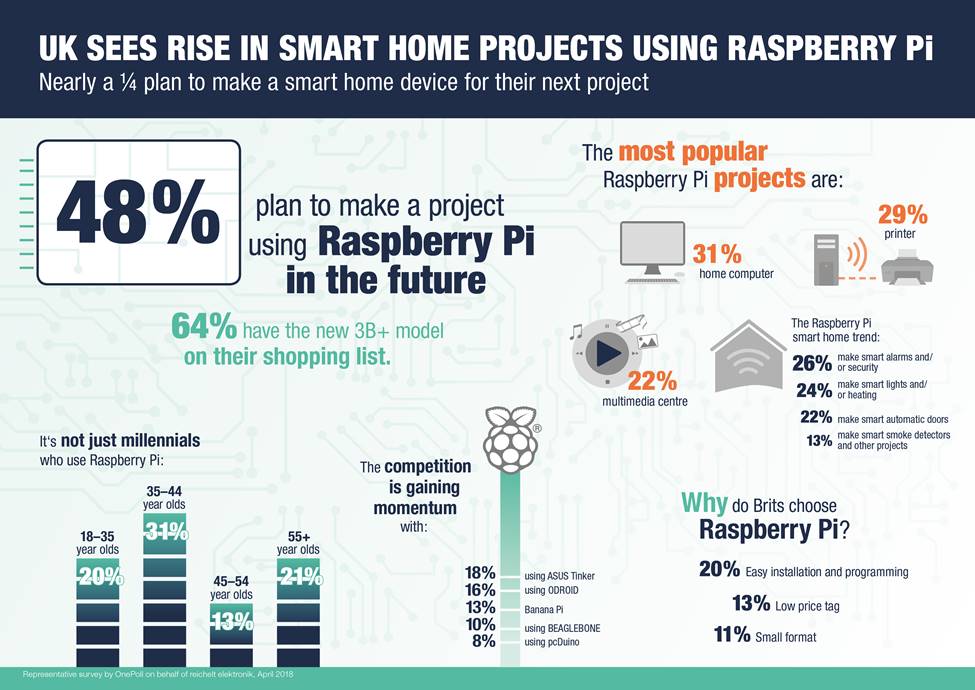 The Raspberry Pi is becoming more popular with UK makers as nearly half of Brits (48 per cent) plan to use Raspberry Pi for an electronics project, with 87 per cent of makers having already used the mini-PC to make a smart home device, reveals new research from online electrical retailer reichelt.

There is a clear upward trend towards home-made smart technology as the use of these devices become increasingly popular for day to day life. The expanding capabilities of mini-PCs like Raspberry Pi are a key factor of this rise in popularity, with 24 per cent of Brits planning to make their own smart home device, such as smart lighting, thermostats or alarms, using a Raspberry Pi board. The most popular DIY smart gadgets are security alarms – 26 per cent have made their own versions, followed by smart lighting or heating (24 per cent).

Nearly half (48 per cent) of Brits plan to use Raspberry Pi for an electronics project in the future. But why is it so popular? According to reichelt‘s research, Brits love Raspberry Pi for:

But what features does the community want for future updates and new releases? More than half of those surveyed want even more memory (54 per cent) and even more computing power (53 per cent) for the next Raspberry Pi model.

Raspberry Pi’s are most commonly used for:

Whilst there is an upward trend for more maker projects, the UK is significantly behind Germany with Germans using Raspberry Pi nearly twice as much as Brits –47 per cent vs one fifth.

Sven Pannewitz, product manager for Active/Passive Components at reichelt, believes the affordability and versatility of the Raspberry Pi is a driver of this trend, commenting: “The Maker projects are definitely showing a positive market development and we are seeing more developer boards being used. The projects are getting smarter, especially when it comes to home automation, because the Raspberry Pi can be used so effectively in a variety of ways.

“The WiFi connection, which has been integrated since version 3, and the new PoE capability in the new 3B+ model, make the Raspberry Pi particularly interesting for smart home projects. The trend for future projects points primarily to lighting and heating control in the smart home, but the Raspberry Pi is also frequently being used as a multimedia centre.”