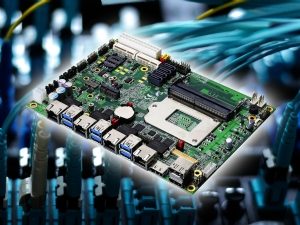 The new LS-579 announced by BVM Limited is one of the most powerful SBCs available in the compact 5.25” embedded form factor. With outstanding computing power from the latest generation processors, comprehensive I/O capability, four SATAIII mass storage interfaces and supporting up to 32GB of DDR4 DRAM, the LS-579 is optimised for use as a network computer or workstation. CAD work stations, video processing, graphics design, database management and network servers are typical applications that will benefit from the enhanced performance over previous generations of embedded SBCs.

The LS-579 is based on the Intel 6th and 7th Generation Skylake and Kaby Lake Core processor families or the Xeon E3-1200 v5/v6 processor in a FCLGA1151 socket all with the Intel C236 chipset.  The HD530 GPU in the Xeon processor offers 24 execution units (EUs), clocked at up to 1150MHz, decoding H.265/HEVC completely in hardware; the 630 GPU in the Kaby Lake version is largely identical to the 530 found in Skylake but with HEVC and VP9 support as the key feature of the upgrade. Displays can be connected via 1 VGA, 1 LVDS, 2 HDMI and one DP port, with up to three separate displays controlled simultaneously.

The LS-579 is equipped with 4 Gigabit Ethernet LAN ports, 3 x Intel I210-AT Gigabit Ethernet and 1 x Intel I219-LM Giga bit PHY LAN.  The I210-AT enables 1000BASE-T implementations using an integrated PHY; it can be used for server system configurations. The I210-AT implements 4 receive queues and 4 transmit queues, with up to two queues dedicated for stream reservation or priority, and up to three queues allocated for strict priority.