Peratech has been presented with the New Product of the Year (Electronic) award by judges at the British Engineering Excellence Awards (BEEAs) on 5th October in London. The award recognises the most significant electronic product available commercially since January 2016. 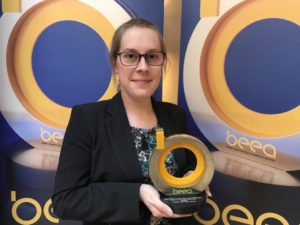 The award was presented to Peratech for its 3D Multi-Touch Matrix sensor, an array of force touch sensors based on its proprietary QTC technology. The array not only determines position in the X and Y axes, but also adds a third-dimension of pressure in the Z axis. The sensors open up a new world of control options, including force based zoom, scroll, and select functions. The technology eliminates issues with accidental touch and can operate in difficult environmental conditions, including when moisture is present. The sensors work even if the operator is wearing gloves and they can be used with any kind of stylus.

Justin Cunningham, editor of Eureka! and a BEEAs judge said: “Peratech is simply one of the most exciting sensor companies around today. While capacitive touch is finding broad application in a range of consumer and industrial products, Peratech’s matrix sensor adds another dimension to interface technology, and there is an impressive range of potential applications.”

Jon Stark, CEO at Peratech, commented: “I’m thrilled that the judges have recognised the potential of the matrix sensor with this award for Peratech. It is a fantastic tribute to our dedicated team who have put so much hard work into developing the product and its technology.”