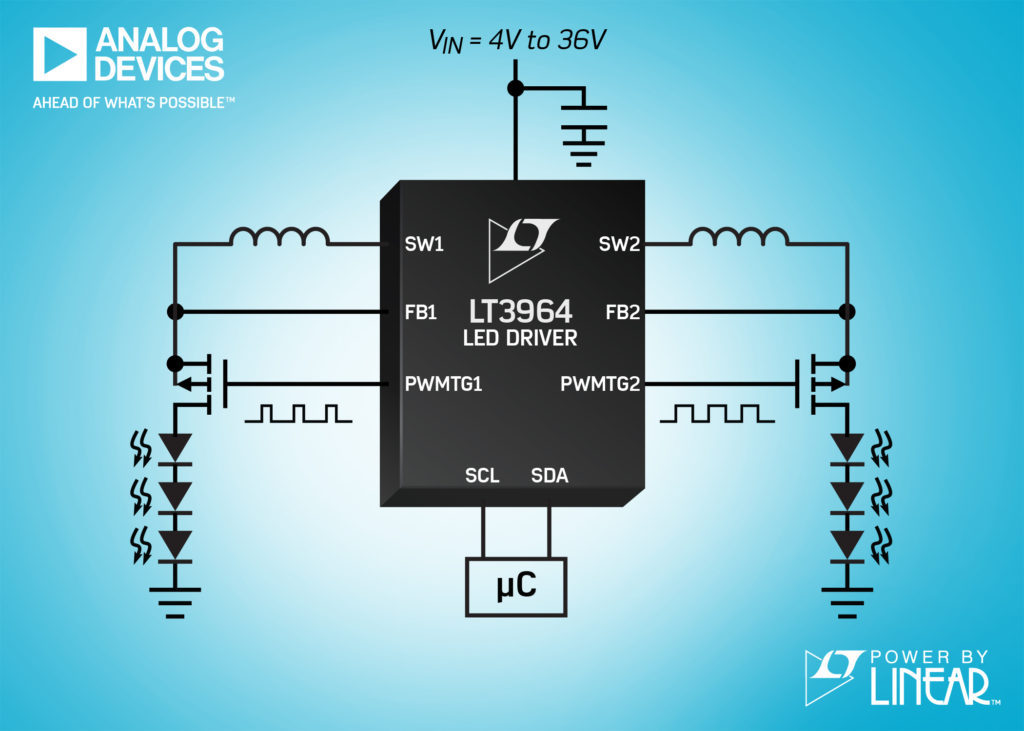 The LT3964 employs fixed frequency, current mode control and operates as a constant-current and constant-voltage source with accurate current regulation to provide optimal LED lighting in automotive, industrial and architectural lighting applications. Synchronous operation results in efficiencies above 94 per cent with both channels at full current load.

Its 400kHz I2C interface greatly simplifies digital PWM dimming. A PWM signal from a microcontroller to the LED driver is not necessary; instead, internal registers are programmed with the desired dimming duty cycle, which is synchronized to the internal clock. This provides dimming ratios up to 8192:1 and eliminates beat frequencies caused when the PWM signal and the internal oscillator are not synchronized. Alternatively, with analog dimming, an I2C settable 8-bit scale factor sets the control voltage-to-LED current ratio allowing more control of analog dimming adjustments. 1000:1 external PWM dimming and 10:1 analog dimming are also provided.

The LT3964’s switching frequency is programmable from 200kHz to 2MHz or it can be synchronized to an external clock signal. LED driver protection features include open LED and short-circuit LED fault detection, and LED overcurrent and overvoltage detection, all of which can be reported via the I2C interface. Thermal shutdown provides an added layer of protection.

The LT3964EUHE is available in a thermally enhanced 36-lead 5mm x 6mm QFN package. Three temperature grades are available, with operation from –40°C to 125°C (junction) for the extended and industrial grades, and a high temperature grade of –40°C to 150°C.