Leti, a technology research institute of CEA Tech, announced today it has developed a methodology for testing high-speed wireless communications on airplanes that allows different system deployments in cabins, and assesses wireless devices before they are installed. 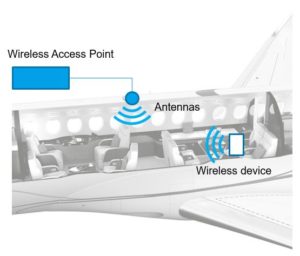 In a joint research project with Dassault Aviation, Leti demonstrated a channel-measurement campaign over Wi-Fi frequency in several airplanes, including Dassault’s Falcon business jet. Using a channel sounder and a spatial scanner, Leti teams determined a statistic model of the in-cabin radio channel, constructed from the antenna position and the configuration of the aircraft.

A radio-frequency channel emulator and the in-cabin channel model were used to test Wi-Fi designed for passenger communication and entertainment before installation in the aircraft. In that test, two different wireless access points and different antenna configurations for Wi-Fi networks deployed in an aircraft cabin were evaluated. Based on an extensive test campaign, mean values of performance parameters, together with the operating margin, were provided according to the device configuration, kind of traffic and channel conditions.

“This research collaboration with Dassault is a critical first step toward validating wireless connectivity systems before they are installed in aircraft,” said Lionel Rudant, Leti strategic marketing manager. “Wireless systems have multiple benefits, ranging from more efficient monitoring of aircraft comfort and safety to reducing the weight of planes.”

Leti’s roadmap also addresses goals for wireless sensor networks, which are part of an industry effort to replace the hundreds of miles of wiring required to connect thousands of sensors and other detectors located throughout aircraft to monitor safety and comfort factors. The factors range from ice detection, tire pressure and engine sensors to cabin pressure, smoke detection and temperature monitoring.

Rudant will present details of Leti’s proof of concept at the AeroTech Conference and Exhibition, Sept. 26-28 in Fort Worth, Texas. His talk, “Test of in-flight wireless connectivity with radio channel emulator”, will be on Sept. 27 at 8 a.m. in room 201B.