P2i, the world leader in liquid repellent nano coating has announced that it has coated more than 250 million electronic devices since it started working with smartphone manufacturers in 2011. The Oxfordshire based company has seen 55 per cent year-on-year growth in the period Q1-Q3, between 2016 and 2017, and is looking for a strong finish to the year to push totals towards the 300 million mark. 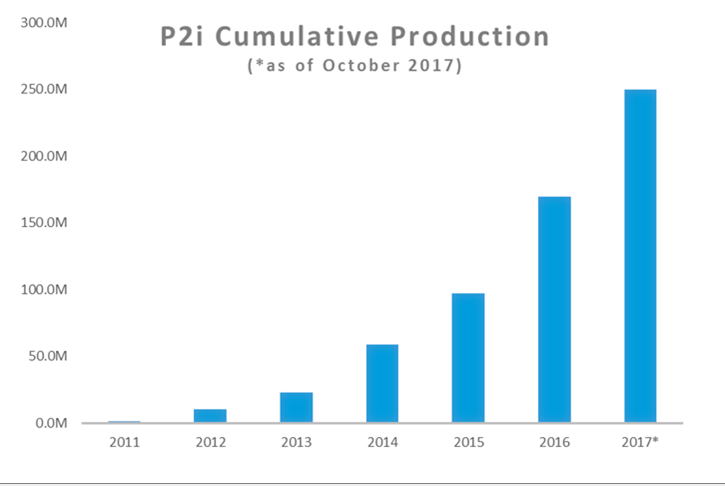 P2i CEO Ady Moores commented: “P2i has fostered incredibly strong relationships with OEMs over the last few years, becoming a trusted partner in the design and delivery of products that meet the expectations of the end user. The company’s growth trajectory runs in parallel with demand for advanced levels of protection on electronic goods from consumers and we’ve proven our ability to deliver on a large scale.”

Demand for P2i’s splash-proof coating has never been higher, in an industry where increasing scrutiny is paid to a device’s durability. It is increasingly being applied as a cost-effective water-resistant solution for mid-tier devices, as well has high-end products.

“The modern consumer wants life-proof products that are robust enough to deal with the trials and tribulations of everyday occurrences. We’ve become inseparable from our smartphones, meaning they go with us everywhere. That means they need protection from the elements at all times, and unfortunately, they also need protecting from their number one threat – humans.”

In December last year, research from IDC showed that nearly 900,000 smartphones are damaged by liquids every day around the world. The impact of liquid damage on smartphones is estimated to be in excess of $96.7 billion annually, hitting everyone’s pockets, from handset manufacturers and network operators, to consumers and insurance companies.

Moores added: “Liquid damage is the second most-common reason that a phone will need repairing or replacing, behind shattered screens, and it’s clear that the vast majority of accidents happen everyday around the home, rather than deep sea diving expeditions. While we don’t yet profess to know the cure for clumsiness, P2i is playing an increasingly pivotal role in mitigating its consequences.”

P2i will be bringing new products with enhanced levels of protection to the market in the next eighteen months, and expanding into markets such as agriculture, automotive and smart cities, as it looks to leverage its experience and heritage in the filtration industry and with military equipment.