The consolidated results reported by authorised distributors in the UK & Ireland for March ’18 show that total monthly billings (net sales invoiced less credits) increased by 27 per cent when compared to the previous month and increased by six per cent when compared to the same month 2017. According to Adam Fletcher, chairman of the Electronic Components Supply Network, the sales by month “three month moving average” for all electronic components remains in-line with historical trends, suggesting continued growth into 1H ’18, and the polynomial trend line suggests a positive B2B ratio is likely to continue into Q2 ’18. 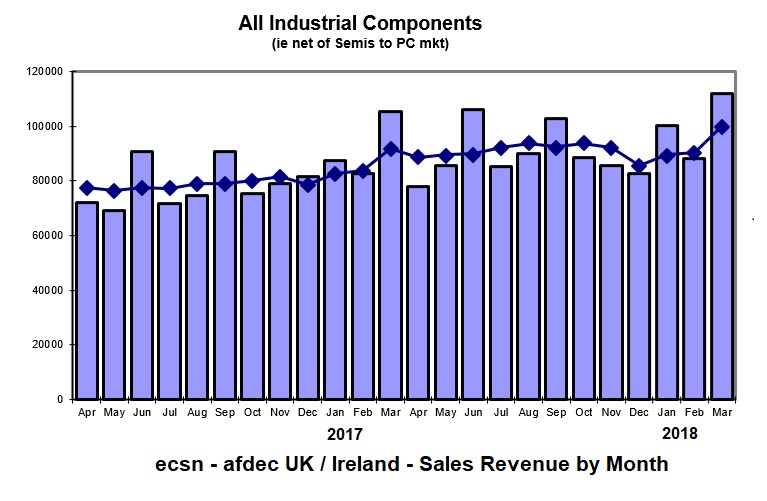 Authorised distributors enjoyed a strong finish to Q1 ’18 although the results for the quarter were at the lower end of the association’s forecast guidance of 10 per cent to 16 per cent growth: “Whilst UK customers remain positive about their business prospects in 2018, the Q1 result does suggest a slowing in the underlying growth rate, Fletcher said. His conclusions are much in line with the findings of Markit / CIPS and the Office for National Statistics (ONS).

“The uptick in inventory levels reported by our afdec members is further evidence that customer billings are lower than market expectations but as we move into Q2 ’18 I’m confident that the eight per cent to 12 per cent growth range our members forecast will be achieved.”