The Manufacturers Association of Central New York (MACNY) have crowned Tim Brauner and David Bates of Knowles Capacitors as the joint winners of the 2017 ‘Innovator of the Year’ award. They were honoured at MACNY’s 104th Annual Dinner, held on the 18th May, after being nominated for the award by President of Knowles Precision Devices Chris Dugan, on behalf of the entire Knowles team.

Tim Brauner and David Bates were nominated on account of their teamwork, innovative thinking and commitment to the success and growth of Knowles in the RF industry. Founders of the Thin Film product line, the pair have created double digit growth every year and tripled the line’s revenue in just five years, contributing towards the future success of the Knowles facility in Cazenovia. 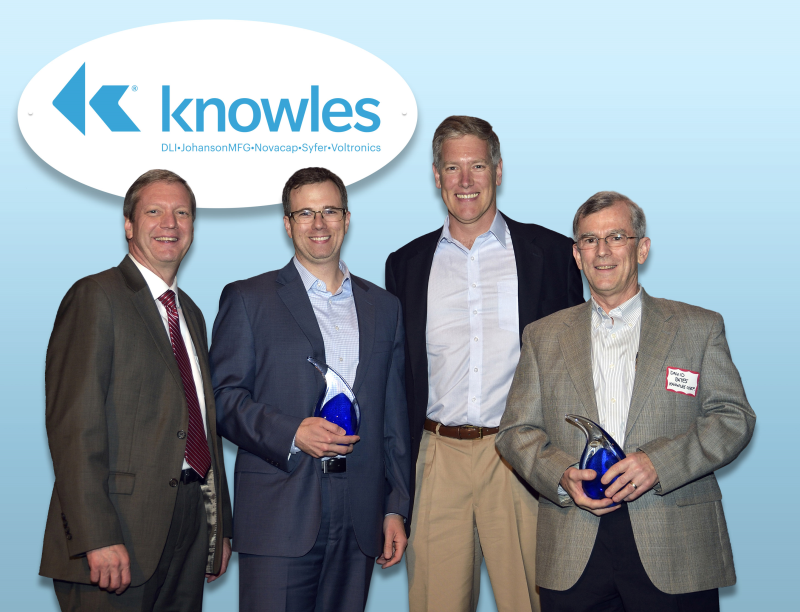 During his 10-year career at Knowles, Tim’s finger is always on the pulse of what customers want and uses this insight to ensure Knowles’s processes, technologies and products support the ever-growing and changing customer needs. Tim’s teammate David has over 20 years of experience in the RF industry and as Chief Scientist at Knowles has developed processes to align Knowles’s roadmap with that of their customers. Together they’ve helped to maintain Knowles’s status as an industry leader in RF products, particularly in the microwave field.

Chris Dugan commented: “It was only right we ask for a dual nomination; Tim drives the commercial innovation and David the technical; David introduces unique technical solutions and Tim commercialises them.”

MACNY President & CEO Randy Wolken added: “On behalf of MACNY, I would like to extend my congratulations to Tim, Dave and Knowles on the receipt of this well-deserved honour.”